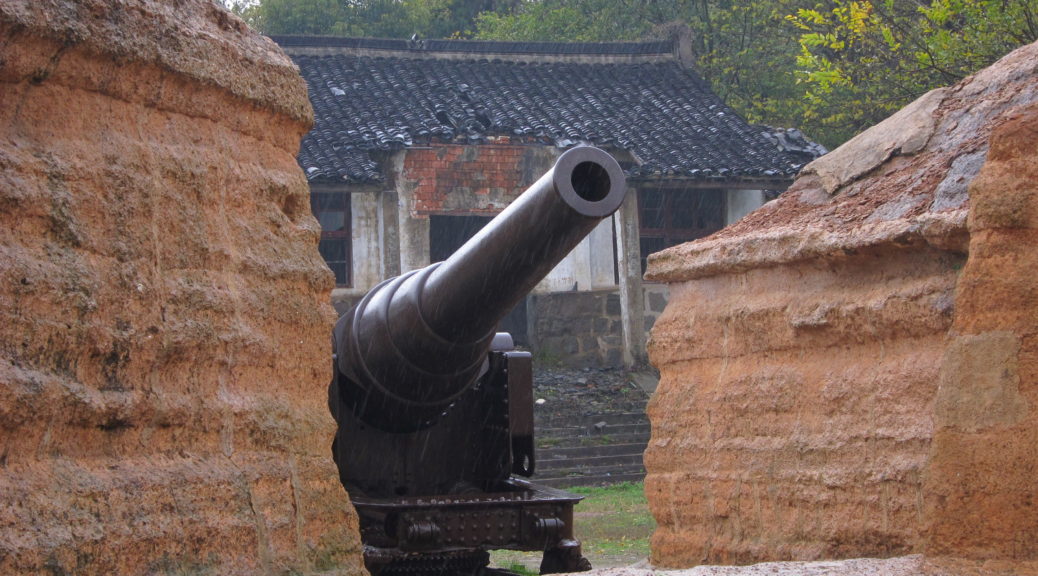 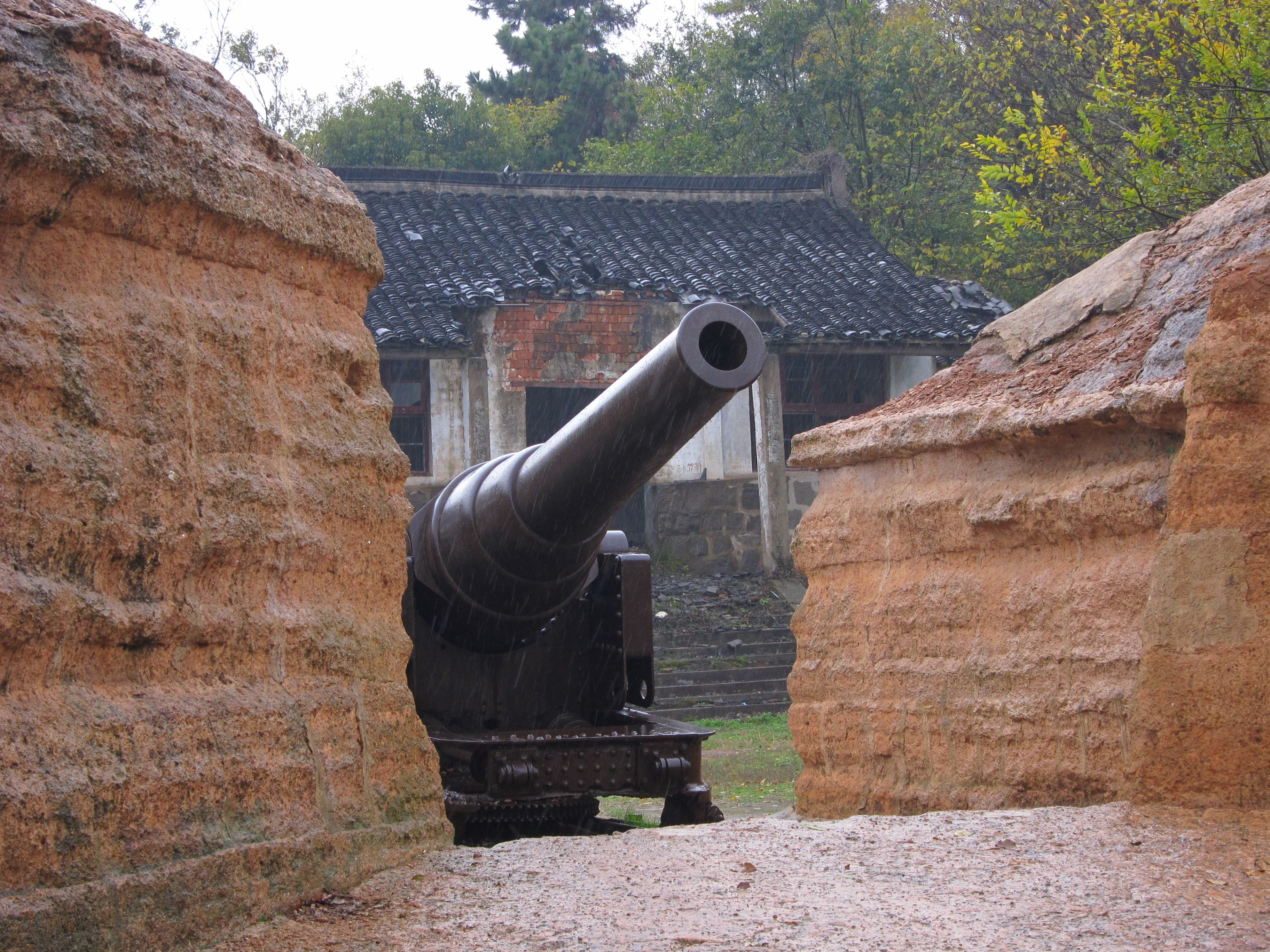 The Guns that Time Forgot

I was barely able to contain my excitement and astonishment when I came upon a 19th century British naval gun in the midst of a drab, rain-soaked and freezing cold Chinese town in November 2012. I was probably the first military historian to lay eyes on this extraordinary survivor that had silently guarded the bay for 128 years. This gun was only the beginning of an extraordinary morning of discoveries.

Zhapu is the traditional gateway to western Zhejiang Province and China’s richest region and the town is a small, semi-industrial fishing port surrounded by green tree-covered hills looking out over the East China Sea located about an hour’s drive south of Shanghai. I came seeking relics of the First Opium War (1839-42) when Zhapu (then called Chapoo) had been bombarded and then invaded by British forces. I found much more than I ever thought possible. 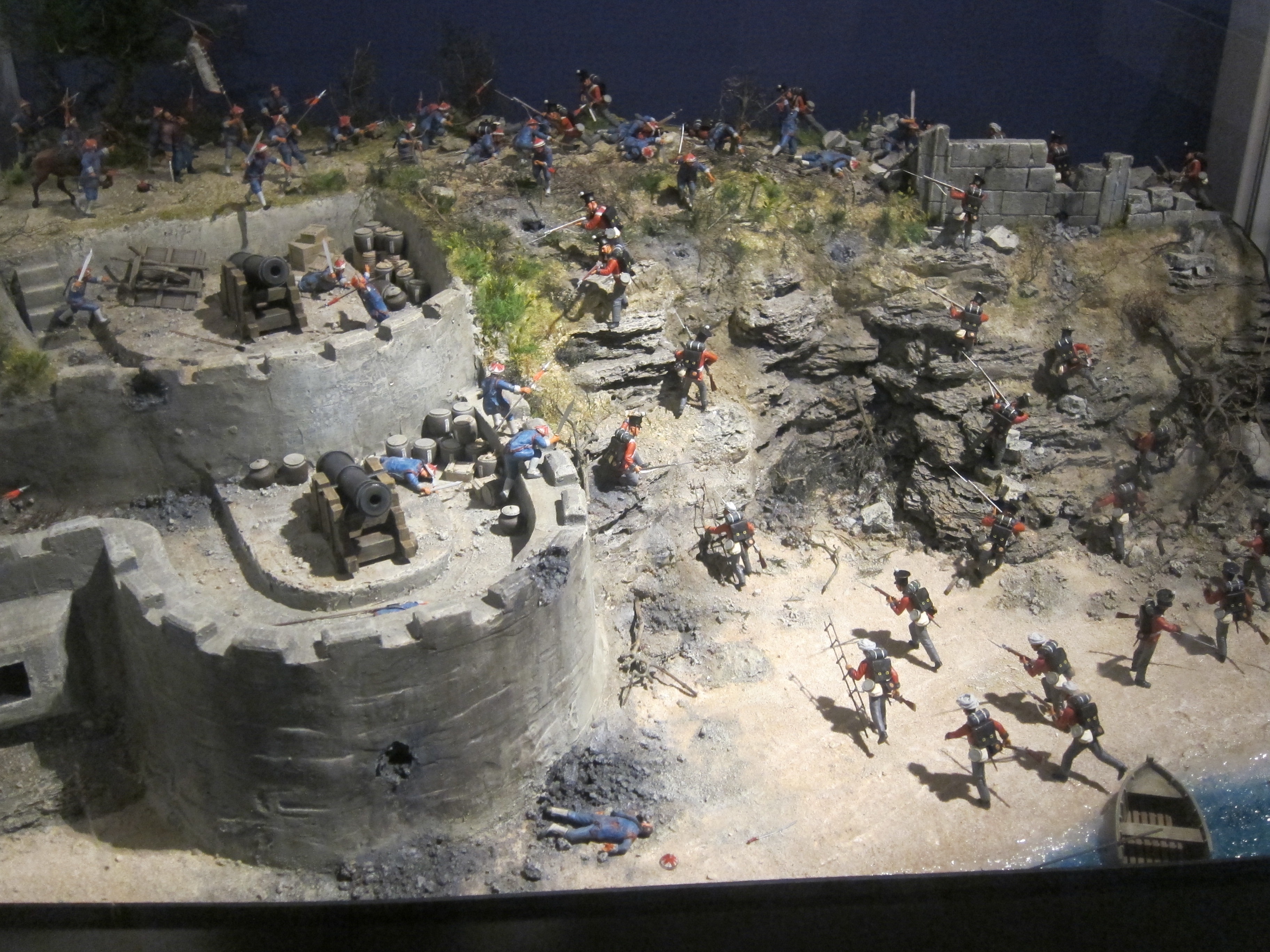 The first line of defence in 1842 had been a series of coastal forts that had been constructed as far back as 1717 to protect Zhapu’s port. Such has been the rapid modernization and development of China over the past thirty years that most historical sites have been swept away. But, by some fluke of history, the remnants of a coastal defence position survived on a small promontory overlooking Zhapu’s fishing boats. Even more extraordinary was what I discovered inside the now roofless sandstone battery – a fully intact British Armstrong naval gun still pointing forlornly out to sea.

The extravagantly named ‘Tian Fei Palace’, as locals call the battery, is in actuality a wrecked Opium War-era fort. On the afternoon of the 17 May 1842, the 72-gun HMS Cornwallis had led eleven other assorted British warships and transports commanded by Rear-Admiral Sir William Parker into Zhapu Bay and anchored. At daybreak on the following day, the ships landed 2,220 soldiers, sailors and Royal Marines. HMS Blondeand Cornwallis attacked the Chinese sea batteries. When I walked around to the front of the Tian Fei Palace fort, huge cannon ball holes were still clearly visible – the entire fort’s surface heavily pitted and scarred with this historical battle damage. In 1842 three masked gun batteries with thirty cannon crowned the hill behind the port. HMS Sesostris, a 4-gun steamer, dispersed the Chinese troops with shells as the British forces advanced. British troops and Royal Marines stormed ashore and the Chinese defenders largely took to their heels. The Naval Brigade under Captain Francis Bourchier took possession of the batteries before the Chinese could ignite mines that they had placed beneath them. 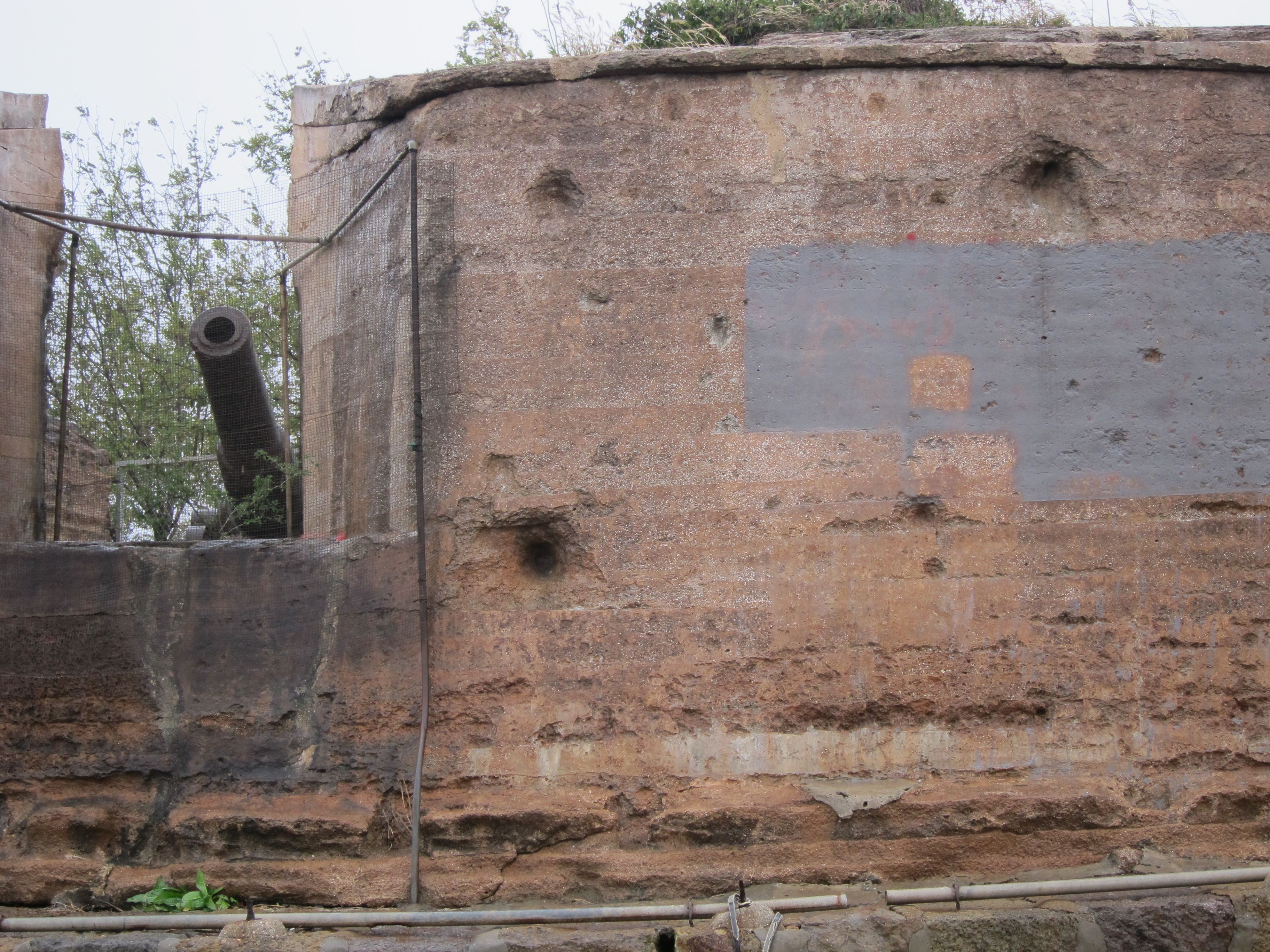 Today the Tian Fei Palace’s cannonball-scarred façade is almost lost among ranks of rusty fishing trawlers and dredgers tied up in rows before the casements. The present gun is a later addition, and proved difficult to positively identify as a steel fence has been erected to keep people away from the fort’s interior. The moulding at the gun’s muzzle suggests an early Rifled, Muzzle Loading (RML) 64-pounder (roughly 6.3-inch), built by the Elswick Ordnance Company (as Armstrong was originally called) and it sits on a damaged naval mounting. Unfortunately, I was unable to see the maker’s plate or stamps to confirm this provenance, though the weapon’s size and overall design leaves little alternative conclusion.

The 64-pounder Mark I gun entered British service in 1864, and there were Mark II and III versions, the last incorporating wrought-iron inner “A” tubes surrounded by wrought-iron coils. The Chinese could have purchased this weapon second-hand from the British, or it could have been old Elswick stock as the Chinese record the 64-pounder as having being emplaced at the Tian Fei Palace fort in 1884. Originally, there were ten RML 64-pounders, but all that remains today are three gun positions, the aforementioned Elswick gun and a pair of much earlier muzzle-loading cannon of unknown origin. 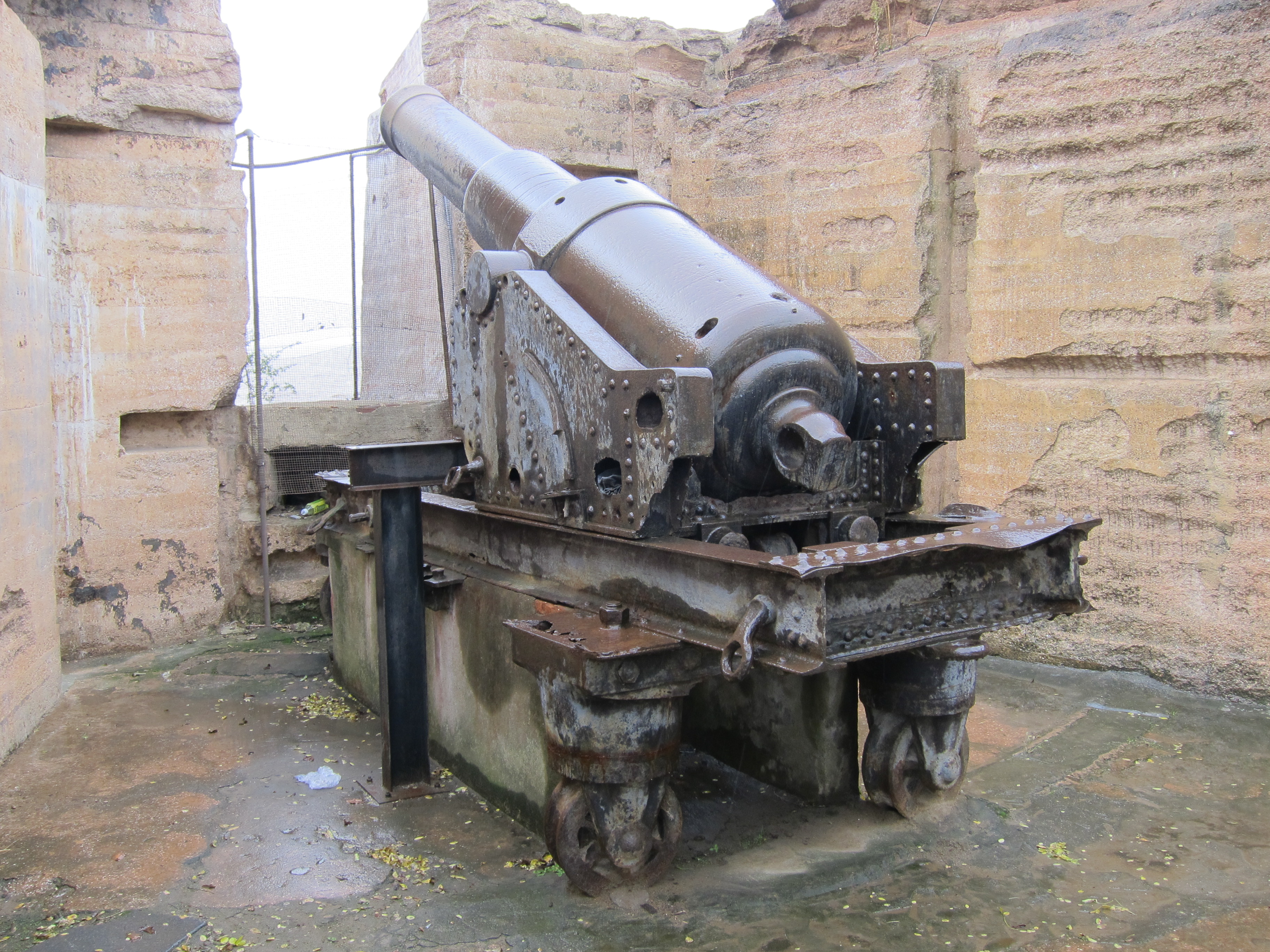 The Tian Fei Palace’s purpose was coastal defence, and the RML 64-pounder was an effective anti-ship weapon. The Chinese wanted to prevent any future re-run of the events of May 1842. The muzzle velocity of the Mark I gun was 1,252 feet per second (382 metres per second) giving an effective range of 5,000 yards (4,600m), allowing complete coverage of the narrow approach channel to Zhapu port. Its anti-ship ammunition consisted of the “common shell”, 57.4 pounds (26kg) empty with a bursting charge of 7.1 pounds (3.2kg). Shrapnel shells could also be fired.

Unfortunately, the updating of the Tian Fei Palace fort’s defences in the 1880s came too late to save China from defeat in the First and Second Opium Wars, though by the time the British guns were being winched into place the so-called ‘Self-Strengthening Movement’ was in full swing, as China desperately tried to update its military and defend its coastline against any future foreign aggressors. But, by the time another enemy appeared the fort’s guns were long obsolete. In 1937, Japanese aircraft heavily bombed the Tian Fei Palace fort during their invasion of eastern China, collapsing the roof. Thereafter, the fort was completely abandoned by the Chinese and progressively demolished from the 1950s onwards. The other nine RML 64-pounders have been lost to history, though it is not inconceivable to suggest that one or two may still lurk somewhere close by, possibly in the harbour itself. 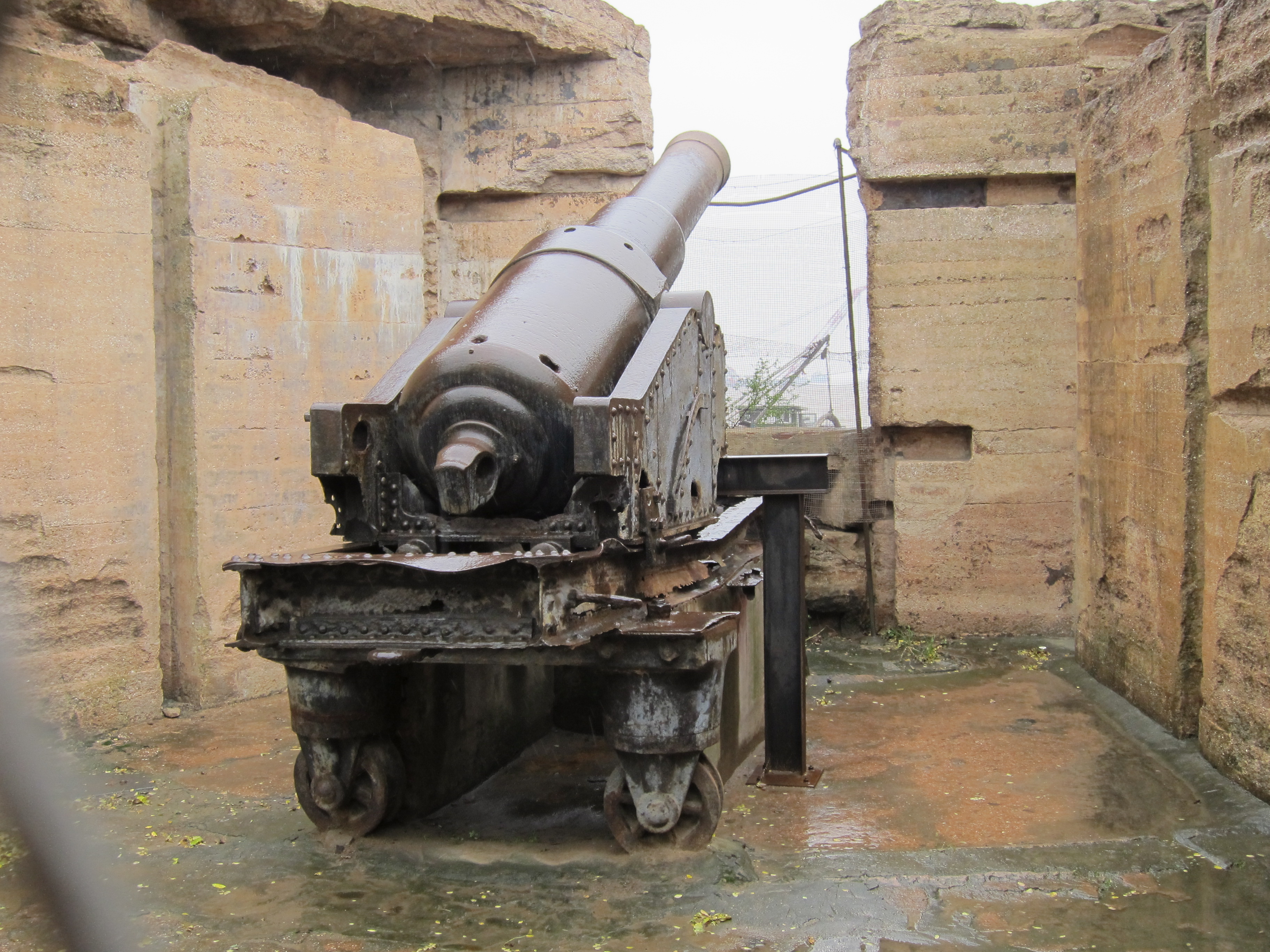 Although the last remaining gun has been exposed to the elements and particularly to salt spray for decades, it remains in remarkably good condition and worthy of restoration for museum display. At the moment, the local municipal government protects the fort and its rare gun, but if Zhapu port is modernized in the future this unique building and its surviving gun may yet be under threat.

The Zhapu RML 64-pounder can now be added to the list of surviving examples of this design. Several remain in the UK, a scattering in Australia and New Zealand, and six at Fort Siloso in Singapore. The Zhapu example may be the last in Mainland China – the only other examples can be found at Lei Yun Mun Fort on Hong Kong Island. 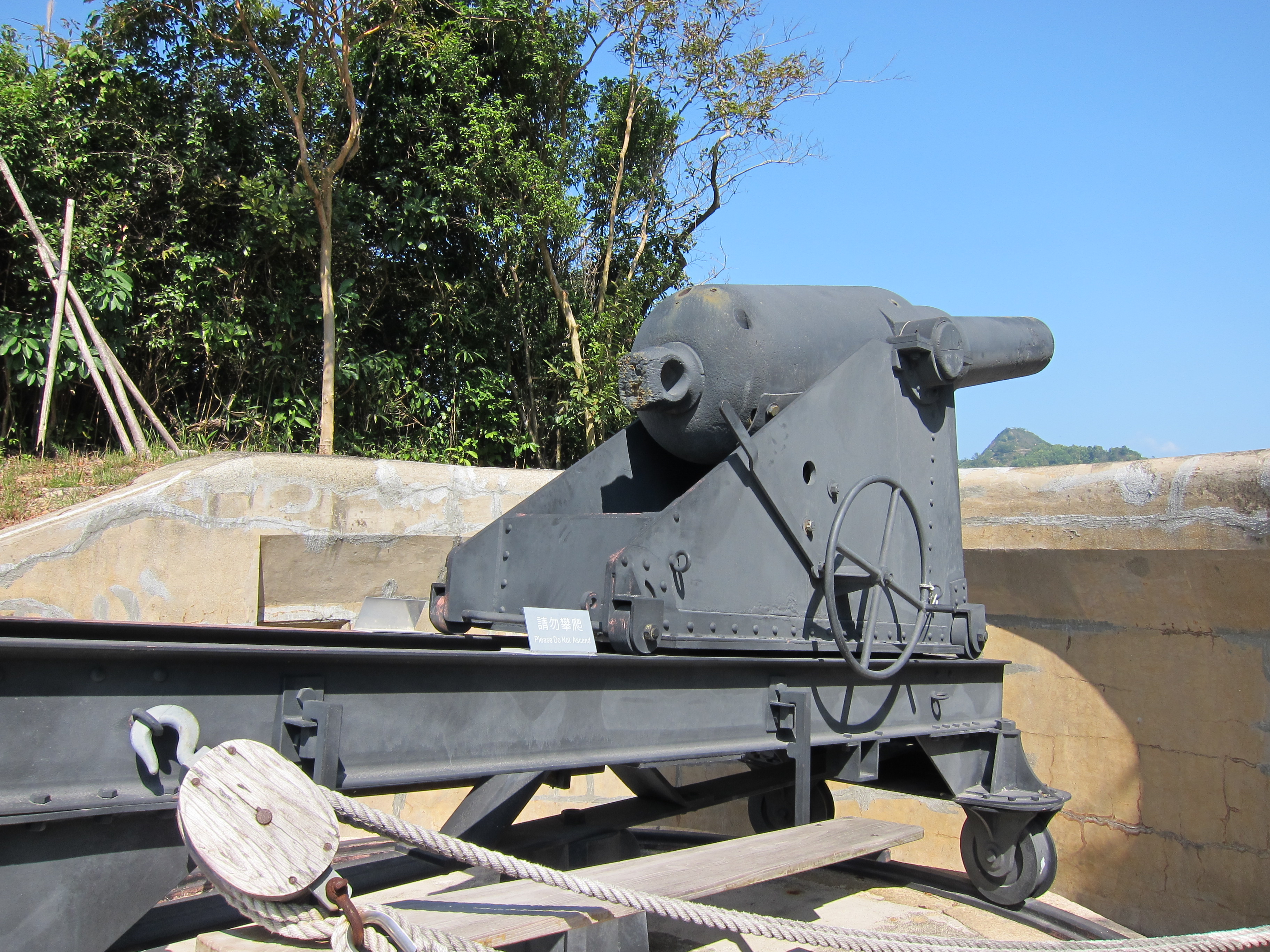 Another surviving example in perfect condition that I photographed at the Lei Yun Mun Fort on Hong Kong Island.

I was determined to try and track down some more neglected fortifications in the Zhapu area; in the hope of finding some more lost Armstrong guns. Speaking to the Tian Fei Palace fort’s old custodian, who seemed genuinely surprised that anyone would wish to visit the place, the author was told of another fort high up on one of the range of wooded hills behind the harbour. After an hour’s searching in torrential rain I eventually discovered Nan Wan Fort. An abandoned and vandalized house stood behind the emplacement, and the rest of the area had a feeling of forgotten desolation. Clearly, few people came up here from the residential areas a few hundred feet below.

Nan Wan Fort is a modern, Western-style single gun emplacement of sandstone construction. Sat between the magazine and the crew quarters bunkers was a very large breech-loading gun that was still sat on its naval mount, its barrel pointing out to sea between two wooded hills. Once, the gunners would have had a bird’s eye view of any ships entering or leaving Zhapu harbour, but now huge trees had been allowed to grow up completely obscuring the horizon and the ocean.

The Nan Wan Fort mounts what appeared at first glance to be an 1880 Armstrong 6-inch (120mm) Breech-Loading Gun. The breech screw was missing, but the naval mount was intact, incorporating a hydraulic recoil control and run out originally perfected by Josiah Vavasseur and bought up by the Elswick Ordnance Company in the 1880s. The 6-inch BL 80cwt gun, sometimes known as the 80-pounder, was a commercial design and some were bought by the British government, eventually replacing rifled muzzle loaders like the Tian Fei Palace’s RML 64-pounder. However, the 6-inch BL had an unsatisfactory breech sealing arrangement (obturation) called the “Elswick Cup”. A new ‘de Bange’ sealing arrangement was built into later marks of the gun.

Clambering up onto the gun mount, I was surprised to discover that this gun still proudly displays the maker’s plate not of Armstrong’s but of the Kiangnan Arsenal in Shanghai. Chinese characters announced that the 6-inch BL is a licence-built copy made during the reign of the Guangxu Emperor in 1888. The Kiangnan Naval Shipyard and Arsenal was established in 1865 as part of China’s ‘Self-Strengthening Movement’. China quickly acquired the knowhow to build licenced versions of Western armaments, particularly Krupp and Armstrong artillery, Mauser rifles and even small warships.

The Nan Wan gun emerged from the Shanghai-based Kiangnan Arsenal in 1888, only eight years after the gun was first introduced into Royal Navy service. The gun position at Nan Wan was also constructed in 1888, evidently specifically for the licence-built 6-inch BL. 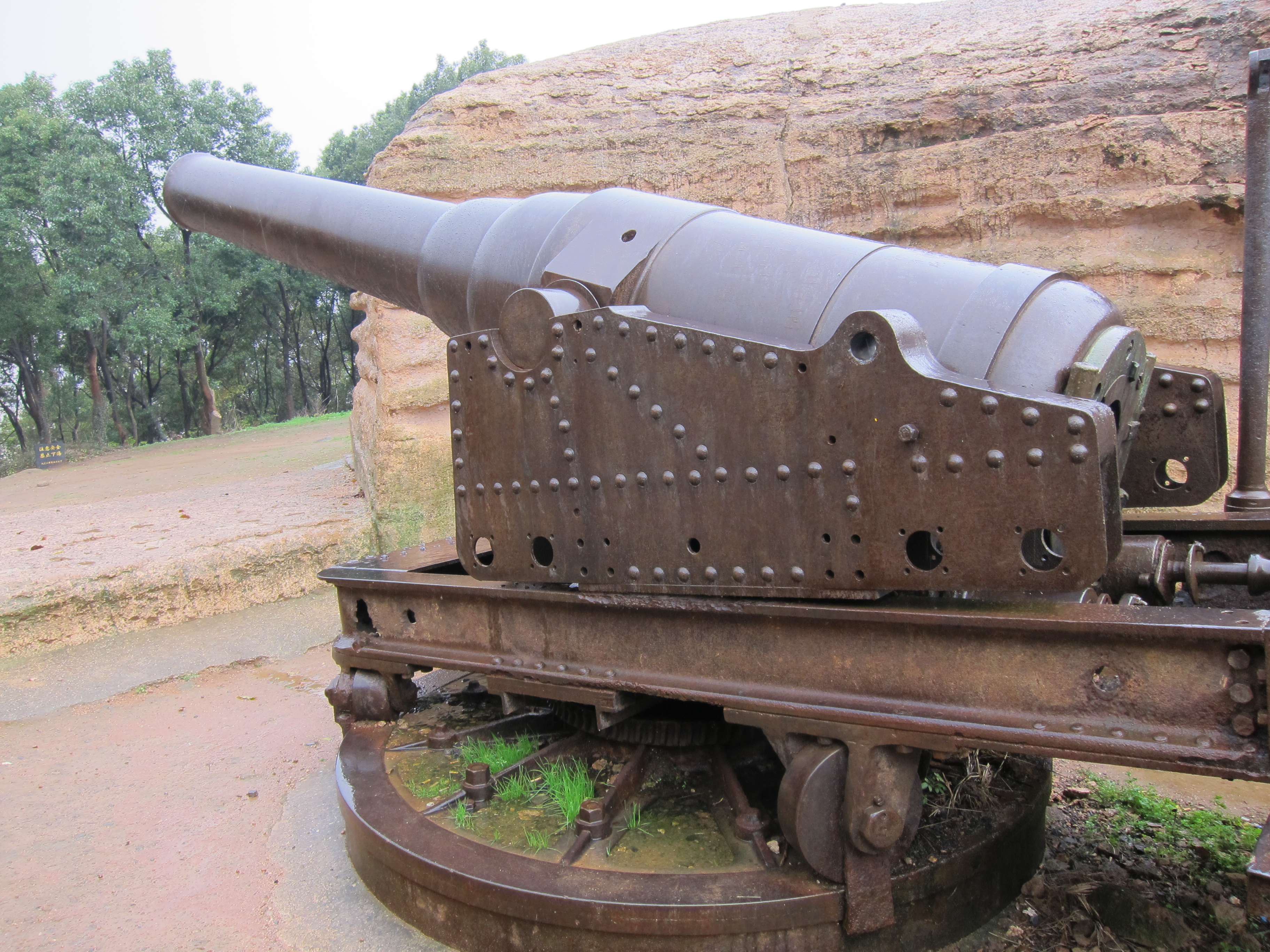 One of the problems associated with early production 6-inch BLs, that weighed four tons, was their generally weak construction. Elswick overcame this by rebuilding guns already in British service with “chase hoops” around the 153 inch barrel for strengthening, and the barrel had been shortened by three inches to keep the centre of gravity on the trunnions. The gun was then redesignated the 81cwt Mk. 1. We see these modifications in the Kiangnan Arsenal copy at Nan Wan. Although the breech screw is missing from the Nan Wan gun, it was unusual in that it was rotated to the left to lock, whereas all other British designs of the period rotated to the right. 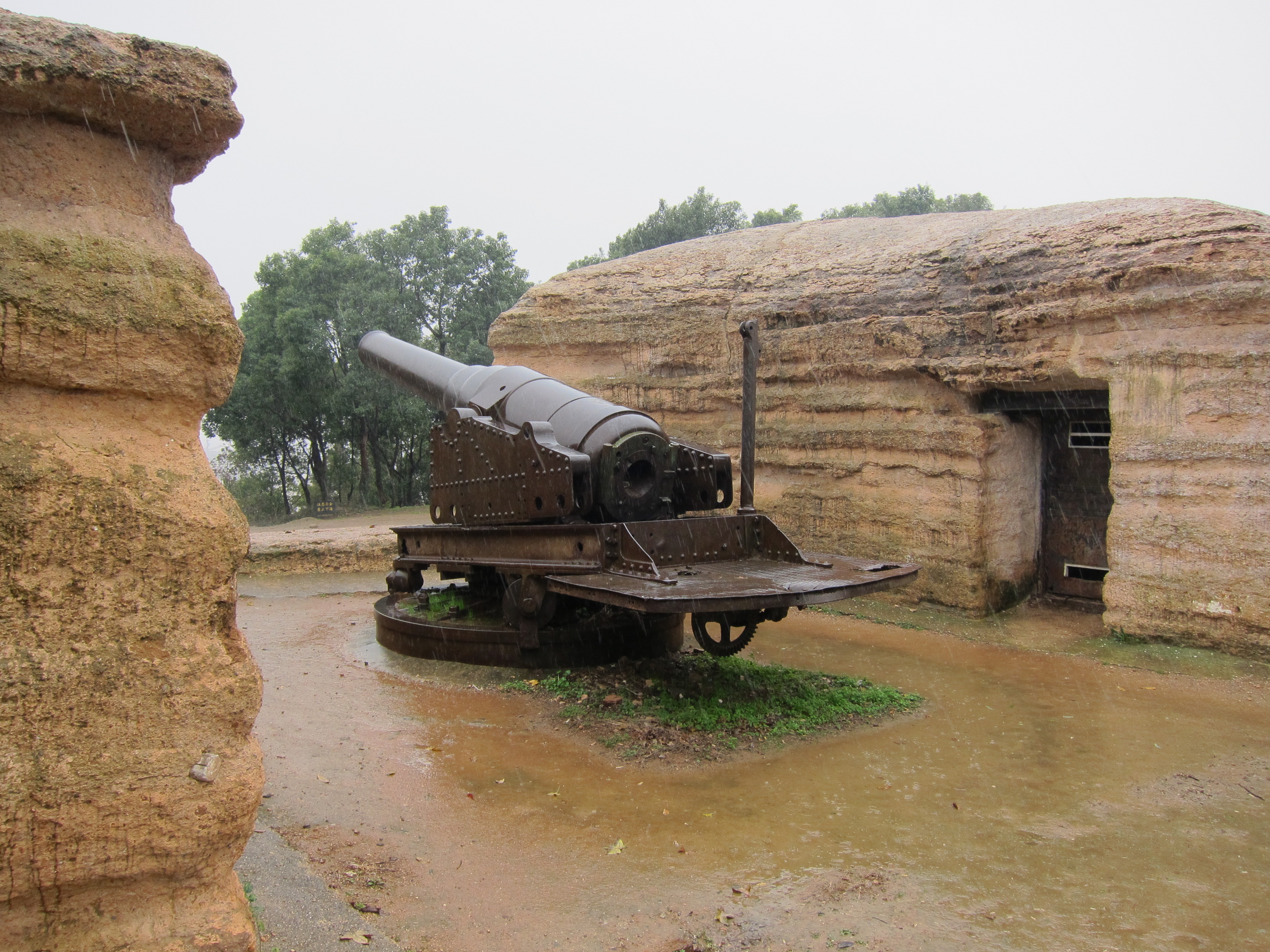 The Nan Wan gun would have been a formidable anti-ship weapon during its service. With a muzzle velocity of 1,880 feet per second (573 metres/second), the 6-inch BL could lob a Palliser, Shrapnel or common shell that weighed 80 pounds (36.29kg) up to 8,000 yards (7,300m). The Palliser was a new type of anti-ship shell popular in the 1870s and 1880s, the shell cavity filled with gunpowder instead of being empty to provide a small explosion after it had penetrated a vessel’s armour plating.

Few of the original Elswick built guns still exist. Four examples are in Australia, including one mounted on the flat-iron gunboat HMAS Protector in Birkenhead, South Australia, a vessel that ironically saw service in China during the 1900 Boxer Rebellion. The example at the Nan Wan fort may be the last licence-built copy in existence.

Nearly every inch of the gun has Chinese characters scratched into the metalwork – crude anti-foreign graffiti from the Cultural Revolution in the 1960s when even China’s copies of Western military equipment were trashed or ridiculed by Chairman Mao’s Red Guards. Judging by the damage inflicted, it is remarkable that this weapon remains in situ today. However, the degree of rust on the mount may on day cause the entire platform to collapse if it is left to the elements for many more years. 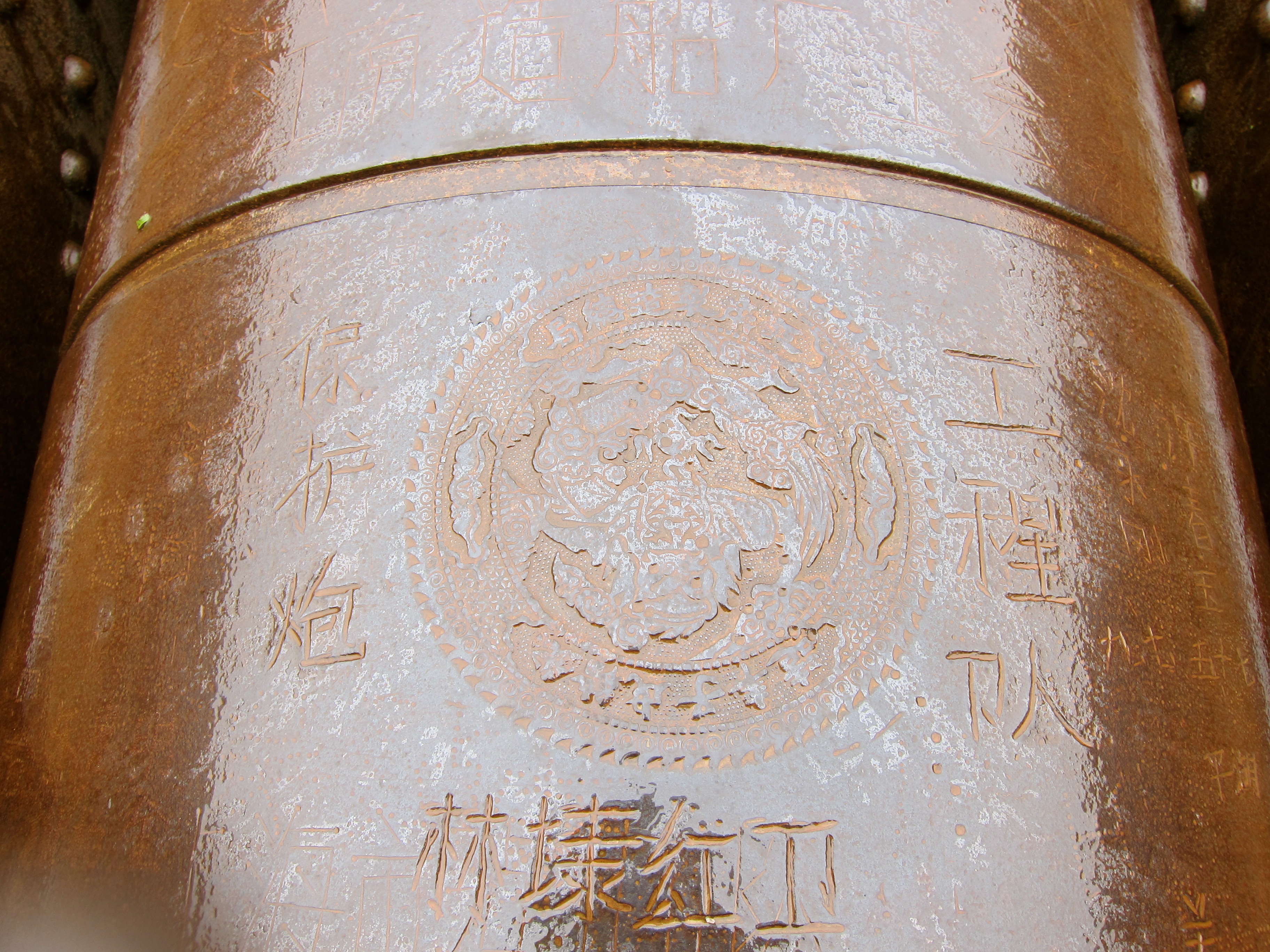 The Tian Fei Palace and Nan Wan Fort tell the story of China’s transformation from weak Empire to modern People’s Republic in stone and gunmetal, a transformation that witnessed China’s repeated and brutal invasion and its attempts to first resist and then to copy the technology of the belligerent powers. The two old Zhapu guns are an important part of this story, and worthy of restoration and preservation.

For more on Britain’s military history in China, visit http://markfelton.co.uk/china-station/