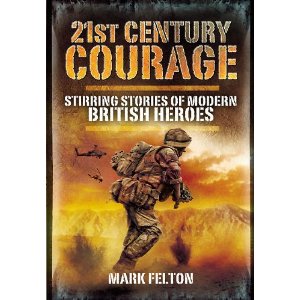 “HEROISM is an ever-popular theme in the publishing world. There are an abundance of books recounting tales of bravery during both of the World Wars, but this title is slightly different in that it focuses on modern-day feats. A collection of well-written chapters highlights the bravery of both military and civilian medal winners. The author sets out to show that the firefighters, police officers, civilians and Service personnel of today are the equal of their forbearers. He has succeeded in producing an inspiring tribute to the courage of 21st century citizens.” SOLDIER

The book examines examples of outstanding courage exhibited by people living in modern Britain. These include British servicemen and servicewomen serving in Iraq and Afghanistan, police officers, and ordinary civilians in Britain and around the world. All of the cases cited have been awarded gallantry medals by the British government since 2000.

The purpose of the book is to inspire modern British people. In the past, the heroes of Empire were well-known and respected, but since the Second World War people have tended to associate heroism with celebrity instead. We hear footballers and actors described as ‘heroes’, and this demeans the word, and the real heroes of modern British society. The generations that fought the First and Second World Wars have often been held up as the greatest generations of British people. This book shows Britons that the kind of grit, determination, courage and willingness to ‘have a go’ exhibited by previous generations are as alive now as they ever were, and heroes can come from all walks of life and all ethnic groups in modern Britain.