“The author of Zero Night with another tale of Second World War derring-do.” The Bookseller 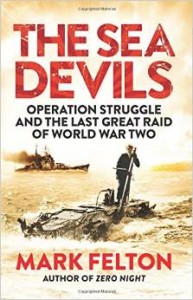 If any of the Sea Devils are captured they can expect a gruesome execution. Mark Felton expertly tells the incredible tale – the last great Allied raid of the war – of how this band of young men living on raw courage, nerves and adrenalin repeatedly combat Japanese defences, oxygen poisoning and calamitous submarine disasters to pull off a brilliant display of ingenuity, courage and sheer guts, on missions that earn the last Victoria Crosses of World War Two and ensure final victory over Japan.