‘Hitler is the arch enemy not only of Germany but of the world…A man’s moral worth is established only at the point where he is ready to give his life in defence of his convictions.’ 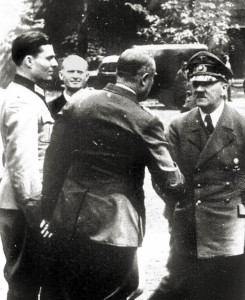 His back ramrod straight, Rudolf von Gersdorff raised his right hand in the Nazi salute as Hitler entered the large covered courtyard. Outside, the thunder of applause still hung in the air from Hitler’s rousing and defiant speech to the assembled party faithful. Gersdorff looked at Hitler, careful to keep his face blank, as the Führer approached him. Hitler, who was slightly stooped by this stage of the war, was dressed in his customary field grey jacket and black trousers, his valet Heinz Linge just a step behind him carrying Hitler’s grey and brown cap. Flanking the Führer were several tough-looking RSD bodyguards in grey SS officers uniforms, their gloved hands never straying far from their pistol holsters. Gersdorff’s right hand remained in its rigid ‘German greeting’ while his left hand quickly and surreptitiously reached into his tunic pocket. He set the fuse to the bomb that he was carrying and spoke: ‘Heil, mein Führer!’ Hitler barely acknowledged him, just slightly raising his own right hand in a perfunctory salute. Gersdorff smiled inwardly – in just a few minutes this monster would be dead and Germany would be saved.

With the debacle of Stalingrad in early 1943 finally revealing the military incompetence of Hitler’s leadership, as well as his evident willingness to sacrifice hundreds of thousands of German soldiers in such a needless battle, the mood in Germany was both depressed and shocked. It was probably the best time to launch a successful coup against the Nazi government. ‘A successful undertaking at that time might, despite the recently announced ‘Unconditional Surrender’ strategy of the Allies, have stood a chance of splitting them,’ notes Sir Ian Kershaw. ‘The removal of the Nazi leadership and offer of capitulation in the west…would at any rate have placed the western Allies in a quandary about whether to respond to peace-feelers.’

But the plotters had much to lose, and although they schemed and encouraged, they were unlikely to raise a hand personally against Hitler. Any attempt on the Führer’s life would have been suicidal, and such self-sacrificial behaviour was left to more hotheaded junior officers. This posed a serious problem for the resistance, for, as the war continued, Hitler’s security began to limit the numbers and the ranks of the officers who could be in his presence, perhaps sensing a latent threat from particular groups.

Though attempting to kill Hitler would be a virtual suicide mission, one officer, Rittmeister Eberhard von Breitenbuch, had already contemplated shooting Hitler using a concealed pistol at the Berghof, but the plot was thwarted at the last minute. Breitenbuch was not the only young patriot to step forward and volunteer to do the unthinkable. One such officer, Oberst Count von Stauffenberg, summed up the feeling among the German Resistance: ‘Since the generals have up to now managed nothing, the colonels have now to step in.’

One such colonel was Oberst Rudolf Christoph Baron von Gersdorff who said to von Treskow a few days after Breitenbuch’s failed attempt on Hitler’s life: ‘It must be done. This is our only chance…Hitler must be cut down like a rabid dog.’ Gersdorff, Head of the Staff Section at Army Group Centre had just volunteered to become the world’s first suicide bomber. 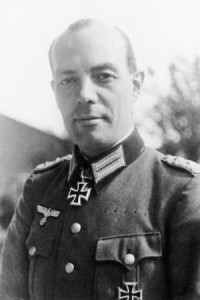 Gersdorff volunteered to kill Hitler when he discovered that he had been selected to act as a tour guide while the Führer perused captured Soviet weaponry at the Zeughaus, the old Berlin Arsenal, on the Unter den Linden. 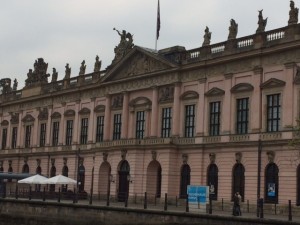 It was part of the celebrations for Heroes Memorial Day. Gersdorff believed that he had a real chance at killing Hitler because he would be close to him for about thirty minutes. He ruled out using a pistol, as he believed that the security would be too tight at the event and that Hitler’s RSD bodyguards would shoot him down before he had a chance to take proper aim. It was also suspected by the plotters that Hitler routinely wore a bulletproof vest under his tunic. Gersdorff first decided instead to blow Hitler up by planting a bomb in his speaker’s rostrum shortly before Hitler arrived to deliver his annual speech.

Gersdorff flew to Berlin on 20 March with Generalfeldmarschall Walther Model, Commander-in-Chief of the Ninth Army, who would also be attending the ceremony. He carried two Clam Mines, small but powerful British explosive devices about the same size and thickness as a paperback book. Treskow had given these to him after he had retrieved them following the failed attempt on Hitler’s plane.

Gersdorff carried out a quiet and unobtrusive reconnaissance of the Zeughaus on the afternoon of 20 March and soon realised that planting a bomb was out of the question. Wherever Hitler would walk, stand or sit was carefully guarded or watched, so Gersdorff rejected any notion of a Georg Elser-style attack on the Führer. Instead, Gersdorff decided upon a radical course of action. He would conceal one of the clam mines in his pocket. As soon as Hitler entered the glass-covered Zeughaus courtyard where the exhibition of weaponry had been set up, Gersdorff would start the timer. He would then stand as close to Hitler as possible and die in the resulting explosion, hopefully taking Hitler with him. Gersdorff faced several significant problems. Firstly, he had no idea of Hitler’s security and guarding arrangements and whether he would be permitted to stand close enough to Hitler for the bomb to be lethally effective. He had noticed that the covered inner courtyard where the display was to be held was huge and airy – any detonation by a small bomb would be quickly dispersed. Secondly, and most importantly, he could not find a sufficiently short fuse; the best that he could manage was one of ten minutes. This meant that Gersdorff would have to closely shadow the Führer to keep him in range of the bomb blast. Would the RSD permit an officer to trail along behind Hitler after the Führer had moved on from Gersdorff’s section of the exhibit? It appeared unlikely, so Gersdorff resolved to try and engage Hitler in conversation whilst demonstrating the Soviet weapons to try and keep him close while the fuse counted down to destruction.

Gersdorff stood next to Model as Hitler entered the covered courtyard at the head of practically the entire senior Nazi leadership circle. Behind Hitler was Hermann Göring dressed incongruously in a white uniform of his own design and wearing red leather jackboots and wearing makeup. Heinrich Himmler’s cold eyes stared out from behind his wire-framed glasses, his lips pursed and disapproving while Hitler’s two senior military commanders, the tall, pompous and slightly rotund Generalfeldmarschall Keitel and Grossadmiral Karl Dönitz, both men grasping their ornate rank batons in their right hands, followed behind the Nazis.

Hitler had already delivered his short speech outside, and Gersdorff had listened, as the German national anthem was played followed by the Horst Wessel, the Nazi’s unofficial anthem. Hitler now had thirty minutes to use up at the exhibition before the wreath laying ceremony commenced once more outside the Zeughaus.

Hitler moved towards Gersdorff’s section of the exhibition, the gallant Baron arming his bomb as the Führer approached. Gersdorff had ten minutes left to live and determined to kill Hitler he smiled and attempted to interest the Führer in the display of Soviet weaponry laid out on table before him. Hitler, a disinterested scowl on his face, moved along the tables with Gersdorff staying as close to Hitler as possible, all the time trying to talk to him. It is a measure of Gersdorff’s incredible bravery that he showed absolutely no outward sign of the impending and horrifically violent end of his life, carrying on as if everything were absolutely normal. The RSD guards never suspected a thing. But suddenly Hitler, instead of asking questions about the weapons, ‘went – or rather ran – out of the side door,’ recalled Gersdorff. ‘During his short tour around the exhibition, he had barely looked at anything and had not said a word.’  A tour that was supposed to have taken thirty minutes had lasted for barely two. Gersdorff considered attempting to follow Hitler from the courtyard but quickly realised that this forbidden behaviour would only alert the RSD and SS-Begleit-Kommando guards in the Führer’s vicinity and have led to his apprehension. Instead, Gersdorff made his excuses and locked himself inside a toilet cubicle. He frantically managed to disarm the bomb with only seconds to spare.

Later that same day a fellow army officer approached Gersdorff and jokingly explained how he could have ‘killed Adolf today.’ Hitler, he said, ‘drove very slowly in an open top car down Unter den Linden, right in front of my ground-floor room in the Hotel Bristol. It would have been child’s play to heave a hand-grenade over the sidewalk and into his car.’ Gersdorff, white faced, just stared at him blankly. The following day Baron von Gersdorff was transferred back to Army Group Centre on the Eastern Front and his plot to kill the Führer was never discovered.