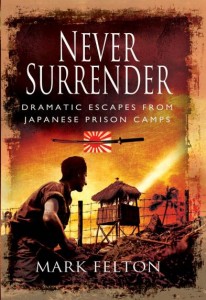 While there have been many fine books covering the appalling experiences and great courage of the many thousands of POWs
captured by the victorious Japanese during late 1941 and early 1942, escape accounts are much rarer. This is due in large part to
the fact that only a comparatively small number of brave souls attempted to escape to freedom rather than suffer brutality,
starvation and very possibly death as POWs.

However, as Never Surrender vividly describes, there were a significant number who took this desperate course. Escapers
faced challenges far more daunting than those in German hands. They were Westerners in an alien, hostile environment; the terrain and climate were extreme; disease was rife; their physical condition was weak; there was every chance of starvation and
betrayal and, if captured, they faced, at best, the harshest punishment and, at worst, execution. The author draws on escape
attempts from Hong Kong, Thailand, the Philippines, Borneo and China by officers and men of the British, Commonwealth and
US armed forces.

As this superbly researched and uplifting book reveals, few escapers found freedom but all are inspiring examples of outstanding
and, indeed, desperate courage. The stories told within these pages demonstrate the best and worst of human spirit.