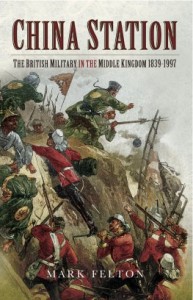 The Author, who lived in Shanghai for a decade, sets out to demonstrate that the British military has been at the forefront of many of the great changes that have swept China over the last two centuries. He devotes chapters to the various wars, military adventures and rebellions that regularly punctuated Sino/British relationships since the 1st Opium War 1839-1842. This classic example of Imperial intervention saw the establishment of Hong Kong and Shanghai as key trading centres. The Second Opium War and the Taiping and Boxer Rebellions saw the advancement of British influence despite determined but unsuccessful efforts by the Chinese to loosen the grip of Western domination. The Royal Navy’s might ensured that, by ‘gunboat diplomacy’, trading rights and new posts were established and great fortunes made. But in the 1940s the British grossly underestimated Japanese military might and intentions with disastrous results. After the Second World War the British returned to find that the Americans had supplanted them. The Communists’ victory in the Civil War sealed British and Western fates and, while Hong Kong remained under British control until 1997, the end of British rule was almost inevitable. But the handover was a masterly piece of pragmatic capitalism and the former Colony remains an economic powerhouse with strong British influence.